On July 7, 1923, before there were air conditioners or major roadways, Collier County was created. The need to patrol the citizens living within the newly established 1,276,160 acres of land became eminent.

Collier was dubbed “Florida’s last frontier” and CCSO’s first Sheriff, Capt. W.R. Maynard and his family proved this to be true.  In December 1926 while Maynard was away, his wife, accompanied by her two-year-old son, led a posse to pursue and successfully capture three fugitives in the Everglades.

The Southwest Mounted Police (now recognized as CCSO deputies) was established after the completion of the Tamiami Trail in 1928.  Also completed in 1928 was the first Collier County jail.  Officers were stationed with their wives within every ten miles of the Tamiami Trail as it ran through Everglades to Miami. Each officer mounted their Harley Davidson motorcycle and patrolled their areas while their wives remained at the station helping to meet the needs of travelers.

Two of these SMP officers gave their lives in the line of duty.

Lewis J. Thorp took over after Maynard resigned in 1928 and kept the frontier feel with his expertise of a bull whip.  Thorp served until his death in 1954. 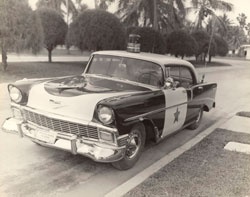 Chief Deputy Roy O. Atkins was appointed as Sheriff and served until E.A. Doug Hendry was elected in 1956.

Sheriff Hendry hired Aubrey Rogers, who he had previously worked with at the Fort Myers Police Department, to work in the Everglades jail and eventually became Sheriff Hendry’s Chief Deputy.  Rogers replaced Hendry and served until his retirement in 1989.