CCSO Names May “Do The Right Thing” Award Winners

Post Date:05/09/2019 12:30 PM
Thirteen Collier County students were recognized for good deeds at a “Do The Right Thing” awards ceremony May 7.

The ceremony took place at the Lorenzo Walker Technical College in East Naples.

The Collier County Sheriff's Office adopted the "Do the Right Thing" program in January 1988, and has honored hundreds of children for acts that reinforce good behavior, positive acts and outstanding accomplishments in the community.

The following students were recognized:

While at school one day in March, Zachariah found $112 cash on the floor outside the bathroom. He immediately reported it to his teacher then took it to the front office to turn in to the principal.

NNMS hosted its annual Walk-A-Thon on March 7 to help raise money for the school. While students were walking around the school’s track, Grace noticed a knife on the ground. She immediately reported it to a teacher, who then turned the knife over to the Youth Relations deputy.

Every day Jake and his mother walk past a neighbor’s house. She is an older widow and always had the most beautiful yard on the street before it was severely damaged by Hurricane Irma. Every time Jake and his mom passed the neighbor’s house, he said he really wanted to help fix the woman’s yard. One day they introduced themselves to the neighbor and offered help. At first she declined the offer but Jake persisted. Many wheelbarrows and the use of a Bobcat later, Jake and his parents were able to restore the woman’s yard.

One day in April while walking to one of his classes, Abner found a wallet on a staircase at GGHS. The wallet did not have any identification but did contain $95 in cash. Abner went to his school’s Youth Relations deputy and gave him the wallet and cash. The deputy was later able to locate the wallet’s owner.

Anderson was out walking with his mother when he found a paycheck on the ground. With his mother’s help, they found the address of the owner on the check and went to that person’s house to return it. That person was grateful that Anderson went out of his way to make sure the check was returned.

Recently, Nico’s mother experienced a medical emergency while driving the car on Immokalee Road. Nico remained calm, called 911, helped his mom navigate her car to the nearby Naples Community Hospital’s parking lot, and then ran inside to get help. Nico was so calm during the incident that his little sister, who was also in the car at the time, was able to remain calm too.

Dillen consistently gets excellent grades, participates in class regularly and has shown great leadership skills while on the safety patrol team. He is assigned to monitor and assist during the carline at VES and also kindly helps students with disabilities during the arrival and dismissal times. Dillen genuinely cares about everyone. He is considerate, accepting, patient and a supportive friends toward his peers.

One day in February, Nicholas went to GGMS’s Youth Relations deputy’s office because he was worried about a friend hurting themself. Nicholas told the deputy what was going on with his friend and that he wanted them to get help. His friend’s counselor was made aware of the situation so they could give the proper assistance and care.

While having fun at this year’s Junior Deputy Fair in March, Dakota found a plastic bag that contained money. She saw the bag had a name written on it so she immediately gave it to the first deputy she could find.

Earlier in the school year, Brooke was working on a technology application at school that prepares students to take certification tests. She noticed some inappropriate files on the application and notified her teacher. The school was then able
to investigate the issue and take action to correct the problem.

One day in March, Liam and his sister were playing in their yard. At one point his father had to go grab something from behind the house. While he was gone Liam’s sister started to drive her Power Wheels toy onto the road with oncoming traffic. Liam was able to grab and hold onto the back of the Power Wheels while shouting for help to his dad, who quickly returned. Liam’s quick thinking helped keep his sister safe.

Want to nominate a kid for a "Do The Right Thing" award? Visit https://tinyurl.com/ybr7tb5y to learn more. 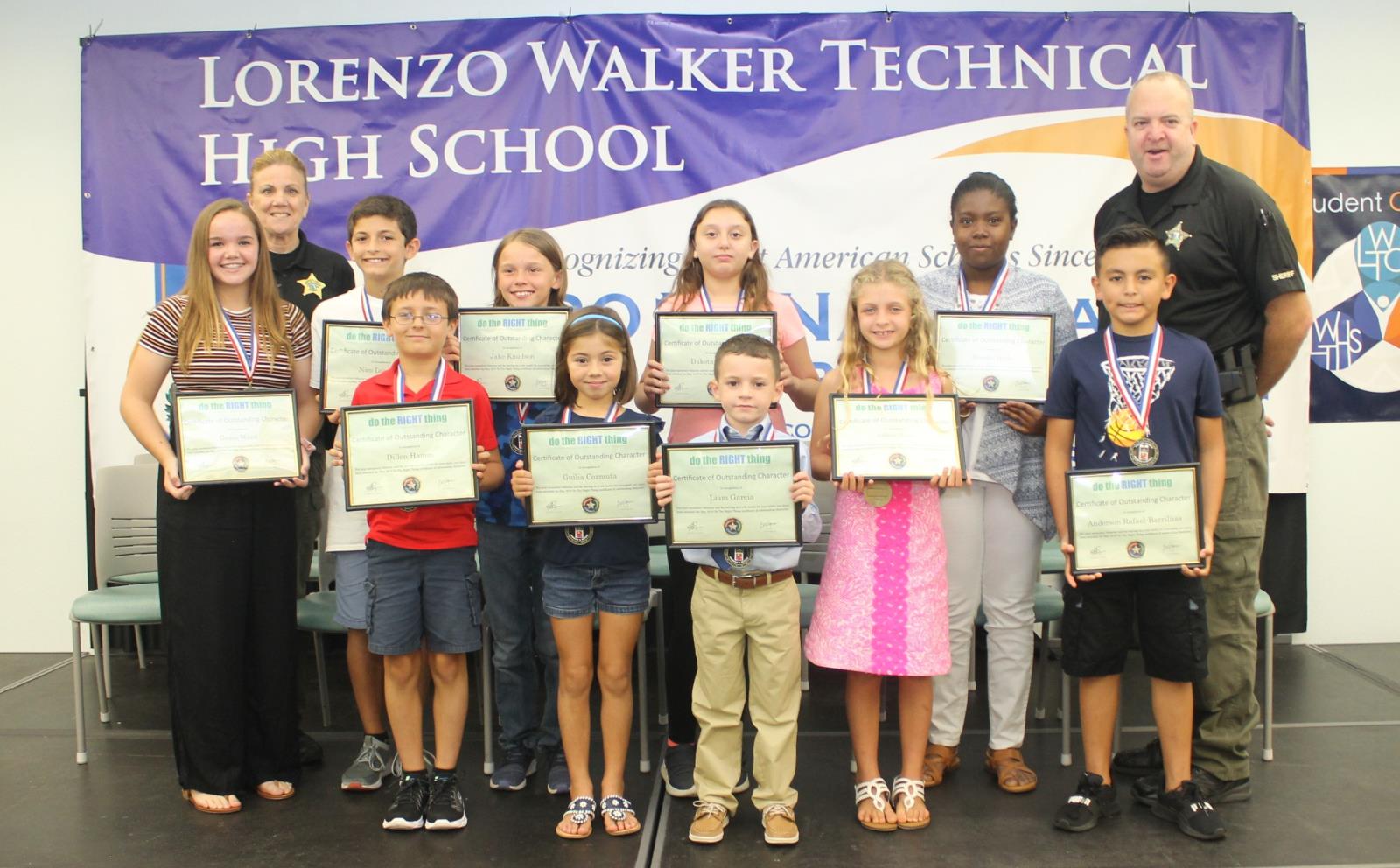